Biden to announce 4G access for Palestinians, but PA not convinced it’ll happen

US President Joe Biden will be announcing that Palestinian cellular companies in the West Bank and Gaza will be allowed to connect to fourth-generation networks by the end of 2023, a senior administration official said Wednesday.

The initiative will be among several “significant announcements” to enhance Palestinian economic opportunities that Biden will be making on Friday after meeting Palestinian Authority President Mahmoud Abbas in Bethlehem on the third day of his four day trip to Israel, the West Bank and Saudi Arabia, said the senior official during a briefing with reporters on Wednesday.

But PA Communications Minister Ishaq Sidr told The Times of Israel that he was unmoved by the planned announcement and that it was not even coordinated with Ramallah.

“I’ve been [a] minister for over three years, and all we’ve heard is that 4G is going to happen,” Sidr said. “All we hear are promises. We need to see something on the ground.”

Sidr recalled that Israeli Defense Minister Benny Gantz told Abbas when they met last September that he was prepared to advance the initiative. Jerusalem never publicly commented on the assurance, but two months later notified Ramallah that it would indeed be seeing it through.

“Since then, nothing has happened, and in some ways, we’ve moved backwards,” Sidr said.

A Palestinian policeman stands next to a poster informing US President Barack Obama, “We have no 3G in Palestine,” in the West Bank city of Ramallah in 2013 (photo credit: Issam Rimawi/Flash90)

Israel’s Communication Ministry only agreed to convene a meeting with Palestinian counterparts six months at the end of April — six months after notifying the PA of its intention to allow the 4G upgrade.

When the sides finally convened, Israel offered relatively few 4G frequencies to the PA, far less than what international observers have assessed the Palestinian sector needs, officials told The Times of Israel in May.

In accordance with an independent study done by the United Nations, the Palestinian Authority team asked for about 90 megahertz of cellular frequencies in the West Bank so as to establish a viable 4G network.

Israeli officials justified the low number by saying there simply was not enough spectrum left for the Palestinians, officials involved in the negotiations said in May.

But cellular frequencies are a finite resource, and observers are concerned that as Israel hands more and more West Bank spectrum to Israeli companies serving settlers, little will be left for Palestinian cellular providers. 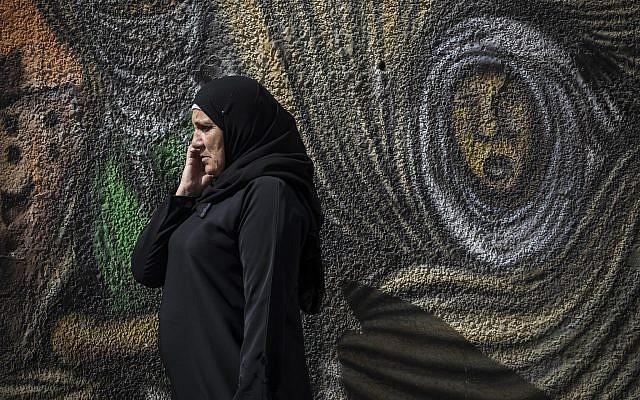 A Palestinian woman speaks on a cell phone in Ramallah on October 28, 2014. (Hadas Parush/Flash90)

A follow-up meeting between Israeli and Palestinian officials was scheduled for earlier this month before Israel asked to delay the gathering until July 17, Sidr said. The communications minister said he would wait until then to see the frequencies offer Israel brings to the table then, rather than taking an announcement from Biden at face value.

The senior US official insisted that the US goal is to have 4G network access available to Palestinians by the end of next year, but also indicated that the process was only in its infant stages. “Our commitment [is] to… begin the immediate steps to begin the canvassing for how we get 4G both for the West Bank and Gaza,” they said. “It’s a really important step for the economic vibrancy and opportunity for Palestinians.”

Sidr said though that such a time frame was unacceptable. “It’s a matter of yesterday, not tomorrow,” he argued, insisting that a “digital gap” between Israelis and Palestinians is harmful for both sides.

The initiative will notably be announced by the US, even though it is Israel’s approval that is required. A separate senior administration official told The Times of Israel last week that Prime Minister Yair Lapid’s office would prefer such moves to be revealed by the US in order to provide Jerusalem with some distance from such concessions.

The Prime Minister’s Office did not immediately respond to a request for comment.

Biden officials have repeatedly raised the need for Palestinians to have access to 4G. During a March briefing with the dovish Americans for Peace Now group, US Ambassador to Israel Tom Nides vowed to push the matter in talks with the Israelis.

■Communications Minister Ishaq Sidr: we intend to sue Israeli Occupation and its companies in Israeli, Palestinian and…

“Who the hell has 3G? It’s ridiculous,” Nides said, adding that he would be “pounding the table about the importance of every Palestinian having the same 4G or 5G on their phones.”

Even the long-awaited introduction of a faster 4G network would leave Palestinian carriers one step behind their Israeli counterparts. Israel is already implementing 5G networks across the country — with speeds at least 10 times that of its predecessor.

Palestinians in the West Bank were only permitted third-generation telecommunications in 2018, four years after Israel had already transitioned to 4G. And in Gaza, where Israel has not allowed 3G equipment to enter, Palestinian carriers only offer 2G — a service initially introduced in the 1990s.

The lack of access to faster cellular service speeds poses a serious hurdle to Palestinian economic development, according to observers.

Israeli networks are meant to serve West Bank settlements without impinging into Palestinian Authority areas, according to agreements between the two sides. But on the ground, Israeli cellular signals often reach deep into Palestinian cities, providing a cheaper and faster alternative.

According to the World Bank, the Palestinian economy lost between $436 million and $1.5 billion between 2013 and 2015 due to Israeli carriers “siphoning off” Palestinian customers, or around 30 percent of the total Palestinian cellular market.

We’re really pleased that you’ve read X Times of Israel articles in the past month.

That’s why we started the Times of Israel ten years ago – to provide discerning readers like you with must-read coverage of Israel and the Jewish world.

So now we have a request. Unlike other news outlets, we haven’t put up a paywall. But as the journalism we do is costly, we invite readers for whom The Times of Israel has become important to help support our work by joining The Times of Israel Community.

For as little as $6 a month you can help support our quality journalism while enjoying The Times of Israel AD-FREEas well as accessing exclusive content available only to Times of Israel Community members.

Thank you,
David Horovitz, Founding Editor of The Times of Israel